Rules are processed in the order they are listed in the Rules Wizard and you can rearrange the rules to better control which rules process which messages. 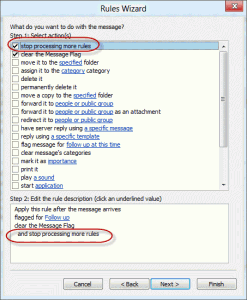 Add a Stop Processing action to each rule to prevent subsequent rules from processing messages which are processed by a rule.

If you want more than one rule to process messages, don't add the stop processing action to earlier rules or put that rule at the top of your Rules list.

If you have a lot of rules, you'll improve the efficiency of Rules Wizard if you put the most active rules at the top of the list and use the Stop Processing action in most of your rules.

Please note that this action only stops the processing of the current message that meets the condition of the rule, it does not stop the rules engine from processing additional messages. When a message matches the rule, Outlook does 'whatever' to the message then moves on to process the next message, as a result, using Stop Processing can save a (little) bit of time.

For example, say you have a rule to move mail from Bob and a second rule to move mail with the subject “Hello!”. If Bob sends you a message with the subject Hello!, both rules will apply (resulting in duplicate messages). If you use stop precessing on the rules, after the first rule moves the message Outlook moves on to process the next message instead of checking Bob's message against the Hello rule or additional rules.

Tip 17: Avoid using Import and Export When you use Rules to move incoming messages to new folders, Outlook can store the replies in the same folder to keep the threadsTip 40: Store Sent Messages Outlook trivia: The Calendar ends on August 31, 4500. From the "Why would you want this many" department: The Places barTip 14: Outlook trivia
Subscribe
17 Comments
Newest
Oldest Most Voted
Inline Feedbacks
View all comments