This bug was (finally) fixed by the January 2011 update. If Outlook is fully updated, lines should wrap properly in a printed monthly calendar.

In older versions of Outlook, users could print a monthly calendar and long subjects wrapped to multiple lines.  This was broken in Outlook 2007 – if you wanted the subject to wrap, you needed to use the Calendar Printing Assistant.

Following a recent update (MS10-045: Description of the security update for Outlook 2007: July 13, 2010
), wrapping is back. Unfortunately, lines break in the middle of words and the end time is missing.

This bug (bad line breaks and no end times) was first introduced in an April hotfix (Description of the Office Outlook 2007 hotfix package (outlook-x-none.msp): April 27, 2010
) and the July update includes that hotfix, which explains why we haven't seen many complaints about it prior to now.

The bad line breaks & no end times bug should be fixed in a future update (while keeping wrapped lines). If the broken words really annoy you or you need the end time, you can uninstall the July update. The security issue it addresses is only triggered by opening attachments so it’s not overly risky to uninstall it but there may be other issues fixed by it that are more important to you. See KB 981048 for a list. 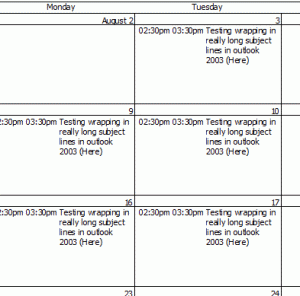 Outlook 2007 before the bad update

Outlook 2007 after installing the bad update

Last fall I mentioned a problem Windows mobile users had when syncing birthdays after installing Office 2007 SP2, where they birthTip 739: Hotfix: Windows Mobile and 12 year Recurrence Issue A few weeks ago I mentioned a work around for the Quick Click category bug, where the category is not saved when Outlook 2007 closTip 673: Quick Click Category Hotfix If you use Outlook 2003 on Vista you may have noticed some messages have the header in the message body, often when you were BCC’dTip 504: Hotfix for Outlook 2003 BCC MIME Bug Outlook 2007 has a lot of calendar printing bugs, which I suppose, is why they released a Calendar Printing Assistant. Some were fTip 463: Another Calendar Printing Bug
Subscribe
16 Comments
Newest
Oldest Most Voted
Inline Feedbacks
View all comments