Office 2013 was released on TechNet this afternoon…

First, let me apologize for getting everyone's hopes up that Outlook 2013 would have a less white, less eye strain interface in RTM. Microsoft gave us more gray, but it just makes Outlook more gray, not necessarily easier on the eyes.

We now have 3 shades of gray to choose from but 14 background decorations. (Yes, 14 designs for the title bar!)

The new "colors" are White, Light Gray, and Dark Gray. The dark gray navigation pane and similarly colored folder names is not an improvement. The light gray theme isn't bad; it's a little easier to read and the status bar is blue, so it has a little more color than the dark gray. It's not so white but the contrast in the folder navigation pane is less than optimal for tired eyes.

Microsoft removed the ability to change the font used for the folder names, so we're stuck with the colors and fonts, and no option to increase the font size to make the names easier to read.

I know a lot of people wanted a black interface; the dark gray isn't even close. Some people hoped we'd get the old blue and green choices back. I knew the chances of that were between slim and none, but thought we might get a black theme.

The color and background options can be set or changed in File, Office Account. 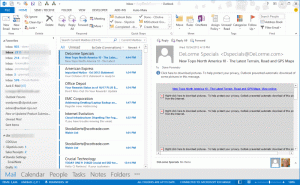 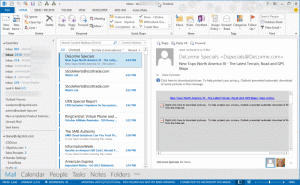 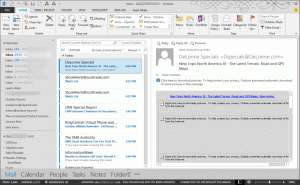 I like the light gray ribbon but I'll stick with the white theme because the folder names are easiest to read. (The white in the Preview build never really bothered me, but I keep the monitor brightness down, especially on my laptop.)

Tip 894: Changing Folder and Message List Fonts When the folder names in Outlook are cut off or otherwise look weird, it's usually the result of the Windows theme you'reTip 239: Truncated Folder Names Outlook 2003 doesn't have a horizontal scroll bar on the Navigation panes, which means if you have long folder names, you'Tip 250: Viewing long folder names
Subscribe
32 Comments
Newest
Oldest Most Voted
Inline Feedbacks
View all comments
Naomi Montoya

PLEASE add some color besides white and gray...it is so hard to read

I have vision issues so the colors used in Office 2013 are totally unacceptable. Microsoft, please make 2010 Office colors available for 2013. You are hurting millions of people with vision issues by liming us to your stupid gray scale. Do you care? Show us that you care. Add the 2010 colors to Office 2013.

It's amazing to me that these comments have been going on for 2 years and still there is no resolution to the ugly white and gray and childish "backgrounds". I wish we could move to another suite as Microsoft doesn't care about it's users very vocal demands.

And there won't be much of a change in the next version - they are adding two: a darker gray and 'colorful' that is basically the title bar area in the app color (outlook = blue, excel = green etc). It looks nice - but I like the white one too, so I'm expecting it to go over like a lead balloon. :)

Happy to say that I could scratch our upgrade to office 2013 just on outlook alone. 2000 employees will not be bothered by this. VERY sorry I bought it at home. Using Outlook express now instead.In 2013 I have no good way of making mails stand out as important ones. I also used to color mails that only cc'd me in blue... Looking for a good replacement, any tips?

Try the eM client - it's a pretty good carbon copy of outlook. I think it does colors.

Downloaded and finished configuring. Looks very promising, thanks a lot!!

Try Windows Phone... People screamed for customizable ring tones and sounds since the 7 release. Still no joy. I dumped the iPhone clone (not in looks but in proprietary control over the user).

WP 8.1 added some customizations i wanted - not everything I had on my old BB though. I gave up on it when i needed a new phone (switched to iPhone), in part because Verizon doesn't have a good selection of WP.

For all the ones who want to get rid of the terrible gray navigation pane! This is a solution: In the Personalization menu, choose the theme "High contrast". It has lots of white in it - including the Nave Pane in outlook.
Use
the Color menu to change other colours if the whole theme looks to
white for you, because it is very light in all settings. Your back in busines with a clear white Navigation pane!
Good luck.

I use visual studio 2012 all day long. The dark scheme is not aesthetically appealing, but I wouldn't change it because it is so easy on the eyes. The brilliant brightness of office 21013, with no ability to change it, is ANNOYING and DISTRESSING. It is SOFTWARE people, it should be configurable!!!

BTW... the idea of the computer display being like paper is so '90's... Paper doesn't emit light, but computer screens do. Reducing the light limits several forms of stress (eyes, brain, etc.).

A lot of us expected a VS style black theme in SP1 and were very disappointed. I knew we wouldn't get colors, but thought we'd get the VS theme.

Thanks. I just can't grasp how these people think...