It seems that Outlook's color change (from orange to blue) is not well liked by a number of users. A small sampling of the complaints I've received:

Where did the yellow-orange icon go for Outlook 2013? The new blue icon for Outlook looks too much like the blue icon for Word. We've been 'taught' through daily use over 15 years that Yellow=Outlook and Blue=Word.

I noticed that all the other programs are matching their original colors, Access, Excel, Word, etc, but not Outlook.

The Outlook icon is now blue because Microsoft wanted to update Outlook's color. Once you get used to the blue, it grows on you.

To make it easier to distinguish Outlook from Word, pin Outlook to the taskbar (and Word if desired). Pin another app or two and position the apps (drag the buttons to rearrange them) after Outlook or between Outlook and Word, if both are pinned. When the applications are pinned to the taskbar their position on the taskbar will not change, which makes it easier to find Outlook.

After a while, you'll get used to the new icons and won't goof up even if they are side by side.

You can pin any version of Outlook to the Windows Taskbar in Windows 7 or 8.

You can pin any version of Outlook to the Windows Taskbar in Windows 7 or 8. Outlook 2010 and 2013 support the Outlook jump lists (seen in the screenshot below), with the New Items commands on the list. Older versions of Outlook will have a most recently used list on the Jump List. 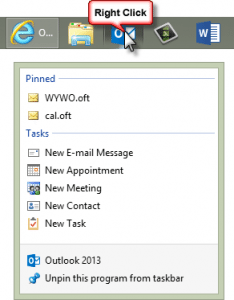 You can pin frequently used files or templates to the jump list. Simply drag the file or template to the icon and drop it. When you need the template, right click on the Outlook icon and choose the template.

Tip 984: Hiding the Outlook icon in the Notification Area