Windows just updated Outlook with many updates and now I cannot open any attachments. I now see one of two dialogs when I try to open or save contacts, tasks, etc. One dialog is the "unsafe attachment" warning when I close and item; the other tells me the attachment was added by Outlook and Outlook is not installed: "The program used to create this object is Outlook. The program is not installed on your computer. To edit this object, you must install a program that can open the object." The attachments are other office documents and pdfs and I'm opening the attachments from within Outlook, so it's definitely installed. 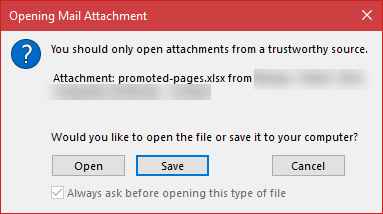 There is one (previously) known issue: if a message whose subject ends with a file extension that is on the unsafe extension list, the message will be blocked as an unsafe file type. You need to save the message to the hard drive and rename it, then attach.

I am running MSOffice Professional Plus 2013 and since the last MS update when in Outlook and I click on a link or picture within an email they no longer open and I get the following message "Your organzation's policies are preventing us from completing this action for you. For more info, please contact your help desk." This is my personal email and I am the adminstrator. I have tried a number of the suggestions on the ineternet from resetting my Firefox setting, changing to IE and checking the registry but nothing has worked. If you have had the same… Read more »

I would edit the registry to remove the Firefox keys and after it is fixed , reset Firefox as default. https://www.slipstick.com/problems/this-operation-has-been-cancelled-due-to-restrictions/#reg2

Hi Diane Thank you for your time and advice. Before deleting all Firefox registry keys I made Edge my default browser and backed up the entire registry. I then opened MS Outlook 2013 and clicked on a few links in different emails but unfortunately I got the same "Your organzation's policies are preventing us from completing this action for you etc" message " which to me rules out Firefox as being the culprit? I did the same exercise with both IE and Chrome and got the exact same message. Will my limited IT knowledge, I can only concluded that as… Read more »

It's not the install, but you can do a repair - it certainly won't do any harm but I don't expect it to fix it either.

Hmmm, I wonder if it is this - from the link I posted - "I just fixed this problem when trying to set up my junk mail filter. Click on any email header. Select Junk mail menu, then Junk mail options. Clear the check mark at Disable links and other functionality in phishing messages."

Hi Diane Thanks for the suggestion, FYI I opened the Junk main options but none of them were checked / enabled. Nerveless I decided to enable all three of them and restart the computer. When it restarted I disabled all three checked options and restarted the computer again and to my surprise the hyperlinks worked, how and why I don't know but the main point is 24 hours on they are still working. This is the second time you have helped to resolve a problem for me and I thank you most sincerely for your time, knowledge and effort. Kindest… Read more »

Thanks for letting us know what fixed it for you.