The Office 2013 and above applications have a Touch/Mouse Mode command available on the QAT. When Touch mode is enabled, the buttons on the ribbon are a little roomier, the menus as little wider. 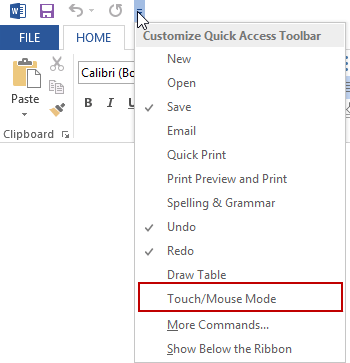 To switch between Touch and Mouse modes, expand the Touch/Mouse button and select Mouse or Touch mode. (If you want to try it and don't have a touch screen, you can use the touch features with a mouse.)

When Touch mode is enabled in Outlook, the folder list has more white-space better folders, and a touch bar is added to the right edge, containing the commands most frequently used with messages. Users can use one hand to delete, move, reply or flag messages, tapping the buttons with their thumb while holding the tablet in their right hand. (Even this lefty took to it fairly quickly.)

A recent update, Description of the Outlook 2013 update: September 26, 2013, which fixes the missing Navigation pane caused by installing the September updates, changed how Outlook 2013's Message list buttons work when Touch mode is enabled in Outlook 2013.

In Outlook 2013 RTM, the Message list contains Quick Flag and Quick Delete buttons to the right of each message. However, these buttons are not touch-enabled and while the Delete button displays when a user moves their finger over the X, as shown in the first screenshot, the X doesn't do anything when touched.

After installing the September 26 2013 update, the Delete button is missing and the Flag shifts closer to the right edge.

Tip 567: Add Comments to Email An Outlook user had this question: “Can I set the default due date for tasks in Outlook 2007 to "None". Most of the taskTip 632: Default Tasks Due Date
Subscribe
5 Comments
Newest
Oldest Most Voted
Inline Feedbacks
View all comments
Mike Z

I have been looking for this answer and no one else has been able to help. This is awesome. I use a Surface Pro with Outlook 2013. I always use a mouse. Thank you very much!!

Hi, Is there any way to customize the right hand toolbar? Example, add quick steps ?

No, that bar can't be customized. It would be nice to have quick steps on it - fortunately, most of my QS are move to folder and they do have that button on the bar.

No, sorry. you can't more or close the touch bar. You can go into Control panel, Display and change the Menu text - that will add a little spread. Unfortunately, it changes the menu text size in every application, which may not be desired.